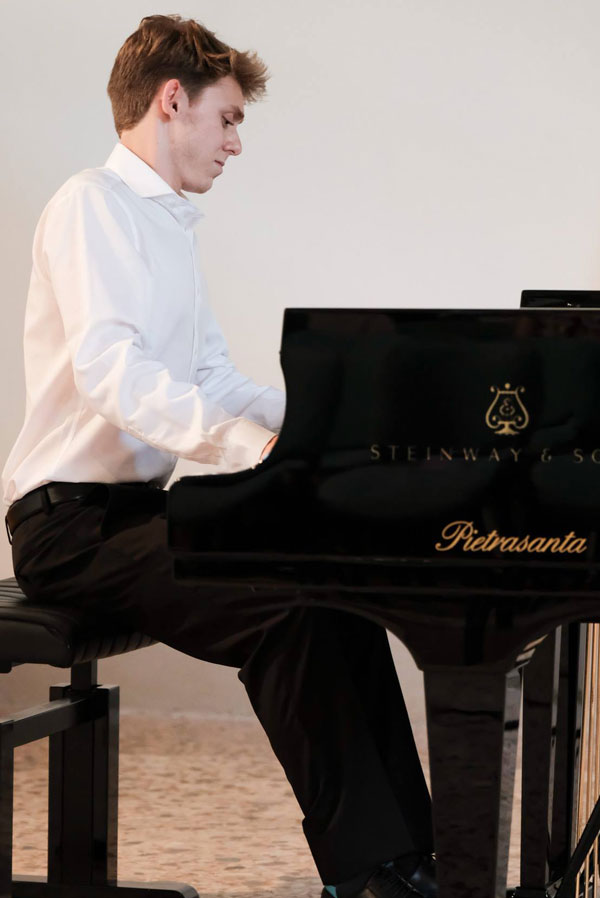 Mr. Ratinov, a sophomore at Yale College, was presented by Shoreline Theatrical Arts last December 9, in a sold-out concert of works by Bach, Beethoven and Liszt.

He will be returning by popular demand in a concert this April 14 at 4:00 in the afternoon. His program will include works by Chopin and Schubert, and features Liszt’s magnificent B minor sonata.

Anthony started piano study at the age of four, in the United States, with his grandmother, Edit Ratinova. Madame Ratinova, as a student in Russia in the late 1940s, had planned to enter the graduate school of the Moscow Conservatory, but was denied admission because of her Jewish roots, and the anti-Semitism prevailing in Stalinist Russia at the time. However, she was able to complete her studies at the Gnessin School of Music in Moscow, where she then taught in the pre-College division for the next 45 years, before emigrating to the United States.

“There are several elements of the Russian piano style that come to mind,” explains Mr. Ratinov, “which my grandmother taught and passed on to me.”

“The first is perseverance and technique. I grew up playing etudes and exercises, which allowed me to really work on my technique from a young age. Practicing until something was perfect was another aspect of this.”

“My grandmother always referenced how her friend and colleague at the Gnessin School, Anna Kantor, who was Evgeny Kissin’s piano teacher, would spend an entire lesson on one measure with Evgeny—perfecting it until she was happy with the outcome. This is an approach that I’ve taken to heart and applied in my current studies, especially when practicing alone.”

In trying to elucidate some of the foundational elements of the Russian piano school, Mr. Ratinov goes on to explain, “But in addition to my technique, my grandma always emphasized musicality, and touch. For the first month of piano lessons when I was a kid, I didn’t touch the keyboard once—we worked on how I would physically approach the keyboard, keeping my wrist and shoulders relaxed.”

“Only after my grandma was content with how I was moving and controlling my body, was I able to start playing the keyboard. This has really carried through to now—when I’m incredibly aware of the touch my fingers make with the keys, and how I can use my whole body to my advantage, being as relaxed as possible during it.”

“I’m not fully aware of what the training in the United States is like,” Mr. Ratinov concludes, “but from what I’ve heard, these elements that I’ve discussed are mostly unique to the Russian school of piano.”

Seating is limited. Admission is free, but donations benefiting Shoreline Theatrical Arts will be gratefully accepted. The suggested donation is $15.